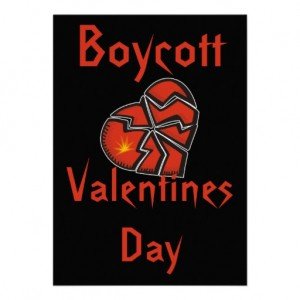 Valentine’s Day is only one day. Don’t get all bent out of shape. Cry if you need to, then do something nice for yourself or for someone else.  It will be over before you know it.

If you’re soon to be divorced or recently divorced or trying to recover from a midlife divorce, you would have enjoyed an article in the Wall Street Journal from several year’s back entitled “Send Me No Flowers.” The article by Jennifer Graham is about “A Valentine’s Day Resistance Movement.” The article reveals the growing resentment people – singles and couples — feel about the compulsive nature of the holiday. Kids starting in pre-kindergarten have to take Valentine’s Day cards to school; high schoolers are encouraged to buy roses for their “true love” as a fund-raiser. Those who don’t get something, feel embarrassed and left out. It’s all so forced. Everyone is subjected to advertisements 24/7 for weeks leading up to “The Big Day.” But uprisings are growing. Many American cities now have Anti-Valentine’s Day specials for men and women at restaurants, bars and other businesses. “Cupid is Dead” parties are cropping up. One Fitness Center has a special on boxing classes with participants urged to bring pictures of their “ex-amours,” to help work out aggression. One single in Philadelphia sent fellow single friends sympathy cards as a joke. “You are not alone in this time of sorrow,” the card said. Another woman urges her single friends to buy daisies for themselves. There are growing online movements and petitions to get rid of the day altogether. One reads, “Valentine’s Day is the most evil day of the year,” and has a place to sign the petition. The end of Jennifer’s article had this to say: “The Roman Catholic Church, unable to verify the history of Saints Valentine (There were at least three), struck St. Valentine’s Day from its official calendar in 1969. And, Cupid, take cover: All three Saint Valentines were martyred. The anti-Valentine movement goes way back.” I know there are some R.A.D.I.C.A.L. Women who are having a party of their own tonight night. I think that’s great! My advice for all of you: Remember: 1. It’s only one day; 2. Realize the last census says there are 80,000,000 million adult singles in the United States; 3. Keep your sense of humor; 4. Wear anything but red; 5. Do something nice for yourself or someone else to really celebrate love!