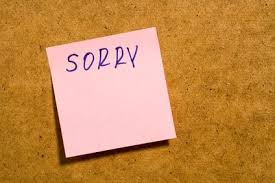 Sometimes we need to honestly apologize. Sometimes we apologize too much. Take responsibility for your bad behavior, but don’t continually beat yourself up.

During a divorce, especially a divorce where your husband was having an affair, there are many times we will probably need to apologize for things we’ve done or things we’ve said or things we’ve broken or words we’ve yelled … (okay, you get the picture). There will probably never be a time in your life when you are more furious or more out of control with anger. But as hard as I tried to stay in control, sometimes without thinking I would blurt out something I would later have to apologize for.

Apologizing is a consideration for the feelings of others and seeing things from their perspective. And as often as not, it’s an offering to someone who was a bystander to the outburst. A true apology is a frank admission of fault and an expression of regret that is sincere and from the heart. But don’t end up in the trap of apologizing too much or making it sound as if you had killed someone. Your mistake most likely was an understandable lapse of judgement or control. It probably wasn’t a huge error that involves more an asking for forgiveness than giving an apology. For most things an honest taking-responsibility-for-your-mistake and a simple straightforward apology is enough. It demonstrates your ability to empathize with others and keeps you from falling into either “the Devil made me do it or he made me do it or she made me do it” mentality. You did it yourself, no matter what the provocation. Don’t beat yourself up about it. Be sincerely sorry, offer a willing aplogy, and then move on. I always felt lucky I hadn’t done something that demanded some sort of incarceration, so the sincere apologies were a small price to pay for my failures of control.

“Each of you should look not only to your own interests, but also to the interests of others.”
Philippians 2:4