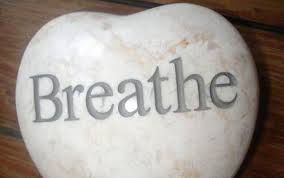 Taking a couple of deep, cleansing breaths can make most conversations more controlled. Try it and see what happens.

Very few of us really learn the skill of listening to another person. And during a midlife divorce we are usually so angry or so upset when we try to converse with our ex-spouse or soon-to-be ex-spouse, that our conversations are either strained and cold or raging with fury. I was often so upset with something that my then husband said that I spit out some response that was neither helpful nor constructive. It was a reaction. I sometimes didn’t care what he said because his actions were showing me that he did not love me, did not care about me, and that he was just trying to cover his rear end or make himself look better with his empty words. I realize that those conversations are not like a normal conversation between two rational human beings. Even so, the suggestion from Richard Carlson’s book is a good one, no matter to whom you are talking; but it’s especially good good advice when the conversation is tense and angry. If we could get in the habit in every conversation to really listen to what the other person is saying, look at that person, and then pause and take a breath before we reply, it would do a lot toward making real communication possible. Conversation in the middle of divorce is never easy. My heart would often start pounding before a single word was said. I’m sure it would have helped if I could have taken a breath before I responded … or before I slammed a door or threw something!

“My dear ones, take note of this: Everyone should be quick to listen, slow to speak and slow to become angry.”
James 1:19 (NIV)