Divorce Warning – Do Not Do This 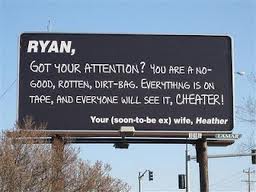 DIVORCE WARNING:  DO NOT DO THIS!

This morning in the Wall Street Journal there was an entry on the opinion page that caught my eye.  It was entitled “A Federalism Watershed.”  Here’s what happened:

“In Bond v. U.S., Carol Bond of Lansdale, PA concedes that she spread a toxic chemical she had obtained from her employer on the car and mailbox of a friend who had an affair with her husband.  The chemical did minimal harm despite her clear intent to do so.  But federal prosecutors intervened in what would normally be a state criminal case to charge Mrs. Bond with violating the chemical weapons convention that the Senate ratified in 1997.  Yes, you read that right.  Mrs. Bond was convicted of waging chemical warfare – unlike Syria’s Bashar Assad, who has been charged with nothing.  The treaty may not get its man overseas, but it did get Mrs. Bond.”  This case may go before the Supreme Court.

Think about it.  Is he really worth being faced with a criminal or federal charge and being noted in the Wall Street Journal to get a temporary feeling of “getting even?” Is the girlfiend worth you being made to look desperate and out-of-control?  (Can’t you hear the conversation between your wasband and the girlfiend?  “See why I had to get away from her?  She’s crazy!”)  Yes, divorce especially divorce that is the result of his ongoing affair with Trixie from the shipping department, makes us reasonably crazy – even though that phrase is a contradiction in terms.

I’ve had actual sophisticated, professional RADiCAL Women do really dumb things.  In fact, I myself took a hammer and destroyed gifts that technically belonged to my wasband — gifts he had given his girlfiend that she left on the back step after an argument they had or something. Oh yes, along with a pair of socks I guess she thought he couldn’t do without. Luckily, he didn’t press charges even though he told me “some of those things were really expensive!”   One thing I did take to a local pawnshop, and then bought myself a really nice bottle of Pinot Noir with what they gave me in return.

Anyway, remember this:  He is not worth tarnishing your reputation for.  She definitely is not worth wasting your precious time worrying over.  Let them go.  They deserve each other.  Wish them well.  You deserve better …. A life of joy, peace, purpose and fun all over the place.   Change is always a challenge.  The transition to a new life is never easy.  But understand, sometimes monumental, status-quo-shattering change is necessary to give you a fresh place to start a life that can be better than you can imagine!  That probably won’t happen if you’re doing time in a jail cell somewhere.