If your ex-husband moved on quickly after divorce, that usually causes an additional level of gut-wrenching pain you have to deal with. After the divorce is final, while we still want to stay in bed all day and pull the covers over our head, our ex acts like his life has taken an invigorating turn for the better … new love, new excitement, new life! For us, it’s another knife in our heart!

And it’s even more hurtful when they start parading the other woman around. We ask ourselves, “What does she have that I don’t have?” Or “What does he have in common with someone half his age?” She may move into your circle of couple friends, attending all of their functions, while you are left on the outside trying to hold yourself together every day.

And the children, depending on their ages, are often forced to deal with having her there instead of you, when they are with their dad or attending family functions. It’s hard on everyone … except your ex who feels like this is a new lease on life!

One of my close friends said, “I’m amazed that he has moved on so quickly! It’s like, to him, it’s no big deal to leave your family for another woman and just move on like nothing’s happened! How can he do that?!”

I felt the same way. How could my husband of 33 years simply latch on to his new woman, introduce her to family and friends, plan excursions with her, invite her boys to the football game or to dinner or whatever, and not think a thing about what he was doing to me or our children?

The truth is, they can do whatever they want after our divorce is final, and they are usually not thinking about us at all. They are focused on moving forward on their own or with someone who is probably tired of waiting in the wings.

Your ex moving forward quickly is hard to accept after a long marriage, especially if you didn’t see the breakup coming. It’s not easy to watch your ex-husband get remarried either.

Send Me The Emails

Signs Your Ex-husband Has Moved On

Some of the signs that your wasband (my term for ex-husband) has moved on:

The fact that he is pretending to be the rational “good guy” is infuriating! (No I don’t want to be friends with a person who didn’t value our marriage enough to work on it, or who would lie and sneak around and have sex with someone besides me while we were still married and not have the guts to tell me that you weren’t happy!)

Why Your Ex-husband Moved On

There are many, many reasons to answer the question, “How can my ex-husband move on so quickly after our divorce … and especially after our long-term marriage?” As women, it seems if we didn’t focus solely on a career, we often have more invested in our marriage partner and our family.

In midlife or late-life divorce, women are more likely to have been stay-at-home moms. That was usually a decision made by both husband and wife after children started coming along. But often, men start being dissatisfied with a spouse who who they see as less exciting or who wanted to concentrate on making the family (and usually his success) the center of her attention.

In my case, my wasband was accepted to medical school after we were married. I even dropped out of college and worked until our children came along. Child care was expensive, and we both thought it would be better to have a solid home base for the kids since we would be moving around with medical school, internship, the military, and residency. I was fully invested in that as well, and loved that role.

But some men, having more opportunity to cheat or to explore new relationships, take advantage of the situation. Also, when men have affairs when our children are young, we try to fix things and make our marriage stronger than ever after that experience. Sometimes that works, and sometimes it doesn’t.

The reality is, according to a study titled America’s Generation Gap in Extramarital Affairs, “Most people who cheat have been married 20 to 30 years and are between the ages of 50 and 60. People born between 1940 and 1956 show the highest rate of infidelity.”

He Was Seeing Her Already

When an ex-husband moves on quickly, it’s often because he had usually left our relationship emotionally long before we even knew anything was wrong. Most affairs had been going on for a considerable time before unsuspecting wives even knew he was unhappy, or that he wanted out of the marriage.

So when we are devastated with the news of him loving another woman and wanting to move on, he is usually feeling a sigh of relief that the “other woman” can finally come out into the open, and he can start his new life. And they often think everyone else is as excited about his new found love as he is.

Most of us (and some of our children) are disgusted and in despair at the same time. One RADiCAL woman,’s daughter said, “Dad, I don’t want to meet her. I don’t want to see her face. She is never coming into my house! If you marry her, I will have to figure out how to deal with it, but for now, I don’t want anything to do with her.” He asked, “Well, what am I supposed to do?” His daughter replied, “You figure it out.”

Many men who leave long-term marriages have either been thinking about other relationships or actively pursuing other relationships long before we find out. Often they are cowards. Instead of coming to us and saying, “I’m not happy … we need to talk,” or saying, “Things have to change for me,” or “We need to see a marriage counselor or a divorce attorney because I’m not happy,” they lie to our faces. For me, that was as hurtful as the fact that he “loved” another woman.

Even if we ask if something is wrong, they often continue to lie, and they sneak around and pretend everything is fine while they are actively involved with someone else. Often they make us think they just need some time “alone.” (That usually is code for “alone with someone else!”)

Also, in more than 12 years of doing Midlife Divorce Recovery work, more and more I see these gutless men doing something spectacular for a family holiday or an anniversary, or planning a special trip or buying a really expensive gift, only to, a few months later, reveal that they aren’t happy and want out of the marriage. Not only is that behavior bizarre, but it’s cruel and abusive as well. It also complicates the healing process and makes it even more difficult to get closure and put the divorce behind us and look forward.

Another reality is that even with all of the destruction our ex-husband’s affair and our divorce causes, they often don’t marry the “other woman.” Dr. Jan Halper, in her book on successful men, noted that only three percent of men who engaged in extra-marital affairs actually married their mistress. Also, according to Dr. Halper, “Men who married their paramour have a divorce rate as high as 75 percent.”

However, once our ex-husband goes down that road and the divorce has happened, it doesn’t do one bit of good to know those statistics or to continually keep ruminating about what he did or why he did it. The reality is he did it, and now you have to figure out your new life.

Steps We Can Take To Move On After Divorce

For a lot of women, it’s normal to miss your ex-husband, but once our divorce has happened. Regardless of what caused it or how fast our ex-husband has moved on, our job is to figure out what we need to do to make progress forward ourselves. For one thing, if we can’t move on in a positive way, often our children struggle, too.

We have an amazing opportunity to teach very powerful lessons to our children about how to deal with adversity. They are going to face tough stuff in life, and we need to be good role models and give them concrete, effective tools to deal with the challenges of life.

To move on after divorce, we need to keep some important truths in mind:

That’s where programs like the Midlife Divorce Recovery can help.

We provide a practical roadmap called the MasterPlan to help you do the grieving and healing you have to do after your divorce. Then we guide you on to figuring out who you are now and what you want moving forward.

Maybe most important in the beginning, we connect you with a whole community of women going through this same thing. Our friends and our family and even our ex are all telling us to “Just move on.” But only other women on the divorce recovery road truly understand how difficult that is. They don’t get tired of listening like our friends and family do. They don’t tell us to “Just get over it!”

The women in the MDRcommunity share successes. They ask advice. They give encouragement. They let you vent without judging. All in a safe, secure, anonymous environment where you don’t have to worry about anything getting back to your ex or your children or anyone else.

Our first job after divorce is to grieve the losses (which our culture usually wants us to just hurry along). We also have to do the healing work. Only then can we start concentrating on the rebuilding of a truly amazing life for ourselves.

Are you tired of feeling depressed and alone?
Start healing today with a MasterPlan Divorce Recovery membership. 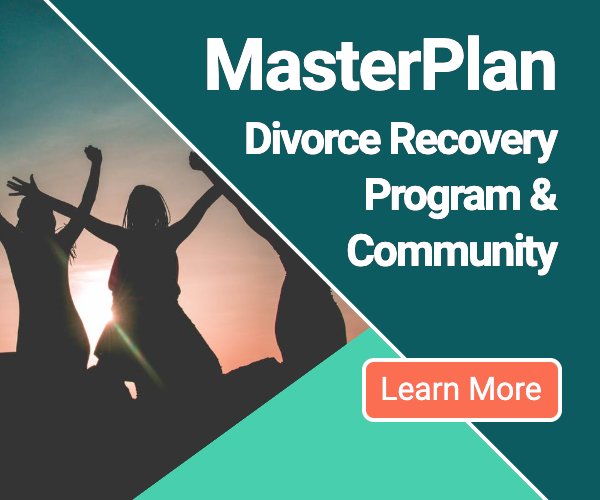