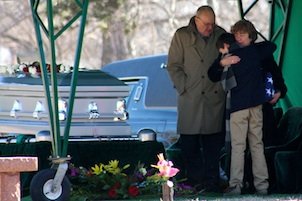 My mom and dad both were known for shining their lights in so many ways. Others are shining theirs after horrifying experiences. Surely I can shine mine after my divorce. How could I not?

“We have spent enough time in the heart of darkness, now we are headed for the heart of light.”
Marianne Williamson, Author

Yesterday, I watched a wonderful Independence Day event featuring the Kansas City Symphony. It was a feast of patriotism that brought tears to my eyes several times.  Just more than a year ago, my dad had a military funeral.  He had the 21 gun salute, the amazing tradition of strong, young soldiers “standing guard” through the whole service, then carefully folding the flag that draped his casket and presenting it to me (My mom had died several years before).  They did a 21 gun salute and taps at this performance last night and tears welled up.

The program also featured a group of young men who had been badly injured in battle.  Young, strong men who lost legs and arms, but who were performing together like any other musical group around our country.  The lead singer sang the song “Hallelujah.”  Again, out came the tissues.  This celebration in Kansas City is a yearly Fourth of July gathering of people from all over our city and our country who come to share their gratitude to those who protect our freedoms and to honor our country. Everyone seemed full of good cheer in spite of the fact that as bad as some things are, our best days are still, and always will be, before us.

No one could have participated in the program (either in person or via tv or satellite far across the world) and failed to be refreshed and uplifted. The music was phenomenal. “The 1812 Overture.”  “Over There.” The theme songs of the different armed services with soldiers, sailors, marines, coast guard and air force members standing and being recognized as their song was played.  The clear and constant message of the program was unbridled pride and respect for those who had, and are still, sacrificing for our country. Then a beautiful, inspirational rendition of “God Bless America” and of course, the fireworks.

I felt the same feeling last night that I had at a conference I attended at Pepperdine University not long ago. One of the things that struck me most is the fact that people from every walk of life, from every background you could imagine from all over the world, all have a light to shine, a gift to share. At the seminars I attended, most of the projects people were doing, or most of the service they were sharing came out of pain. The seven foot tall John Gak from the Sudan who had been a child soldier and had watched his family killed, had started a school in Sudan … a school for children in the morning, adult education in the afternoon, Bible study in the evening. There was the couple from Ghana who after surviving ethnic cleansing had created a home for orphans. There was the woman who had lost a child in our country who was sharing what she had learned from the grief of that experience. There was the judge who sees hard, difficult, cases every day who was sharing how to be God’s presence in the middle of human pain. And then there I was trying to explain that God will use even divorce for our good and his glory. So much of the good in the world comes out of pain. People who have survived a struggle, but who are now shining like never before.

Last night the program was a night of amazing grace all over the place, just like the conference in California. I wish every single one of you could have been there!  We all have a story to tell and a light to shine.  Let’s use our own struggle for something good …. and shine like never before!

“For God who said, ‘Let light shine out of darkness,’ made his light shine in our hearts … ” (and he wants us to shine his light in the world!
Romans 4:5a (NIV)

Suzy developed Midlife Divorce Recovery as a safe refuge for people healing and surviving the overwhelm of divorce. Starting her first RADiCAL support group in 2003 she's been helping women navigate the journey of divorce ever since.
‪(609) 316-0839‬
Get A Free Consultation