Standing Up for What’s Right 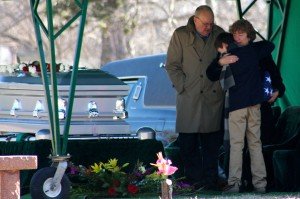 This was a picture from my Dad’s funeral in January. A group of soldiers stood in the freezing cold during the entire grave-side service. When they folded the flag that draped my Dad’s casket and handed it to me was one of those moments that will stay in my heart forever. Thanks Mom and Dad and all veterans everywhere.

“This great experiment in liberty will endure and flourish only so long as we maintain the humility, faith, and character to govern ourselves.” ~ John Adams

My older brother once told me that there is only freedom where there are boundaries. At first glance, that seems like a contradiction in terms. We usually see freedom as lack of boundaries. But unless there are boundaries, there is no freedom at all, and total chaos is the result. If the idea that everyone is free to “do his own thing,” is taken to the extreme, people would be free to murder, steal, lie, abuse, (sleep with someone else’s spouse) and the world would be in utter chaos. It is only when we all understand that there are Spirit-inspired moral laws that give us lines that should not be crossed, that we will be able to govern ourselves and demand certain standards in our homes, schools, churches, nation and in other nations of the world. We all must take a stand in our own daily comings and goings that when a person is abusing someone else, it is our obligation to stand up and defend them. In the case of our own midlife divorces, I think we all had at one point or another the obligation to say, “This is not right.” “I will not allow you to continually disregard my god-given right to honestly, faithfulness and fidelity to our promises to each other, to our friends and family and to God himself. Freedom only works when we all have the moral backbone to govern ourselves with humility and compassion. Only then can we rightfully expect moral actions from those with whom we share our lives.

“The Lord is the Spirit who gives them life, and where He is there is freedom.” ~ 2 Corinthians 3:17

Let’s remember and respect all those who have (and are now, today) serving our country so that we, and others, can be free. I used to always call my dad on this day to tell him how proud I was that he served in Patton’s Third Army in WW II. I would tell my mother how proud I was that she was an Army nurse who cared for those who were injured in battle. I still try to always thank any soldier I see and tell them I appreciate their sacrifices. We should all be eternally grateful for all those who are willing to put their own lives on the line for us. And by the way, that includes police officers and fire fighters and all those who serve us daily in ways we so often take for granted. Let’s also take a minute to thank God for all of these people and to pray for their protection and safekeeping.