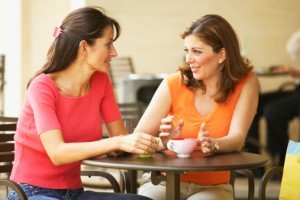 Finding other women to talk to
after your divorce

“Boomers love to do everything their own way, and they are out in front on divorce, too. While the overall divorce rate in the United States has decreased since 1990, it has doubled for those over age 50.”  AARP – June 6, 2012

Yesterday, on Independence Day, a RADICAL Woman sent me the following article that appeared in the AARP Bulletin in June   http://www.aarp.org/home-family/friends-family/info-05-2012/life-after-divorce  .  The article is entitled “Life After Divorce:  More boomers are calling it quits after years of marriage.”  I had seen the article and had spoken with one of the local television stations about it.  My friend said, “Note the divorce rate in people over 50 has doubled since 1990.”  The article went on to say, “If this was a disease, it would be an epidemic.”  I know the fact that this is so common doesn’t help you feel any better.  I kept saying to myself after my divorce, “But we were different.  That wasn’t supposed to happen to us.”  But it did.  So now, we are all statistics in this cultural phenomenon.  That fact doesn’t alter what’s happening in our life.  Every woman in this divorce epidemic has to figure out “What do I do now?”  One good/bad thing about this is that there are so many of us.  That means we have more women we can join with and learn from share this divorce journey with.  We are not alone.  That’s the whole reason I created the R.A.D.I.C.A.L. MasterPlan and the MDRcommunity.  Together, we can get through this more quickly and with less angst than we could just stumbling along on our own.  We can share problems and issues, get advice, give advice, laugh together, cuss together and keep moving forward … TOGETHER.  We’ve got some Divorce Recovery boot camps in the planning stages as well as some small Radical Retreats.  The more of us who join together, the more powerful we’ll be.  I read in the Wall Street Journal this morning that one of the amazing things about America (and other countries as well), is that people voluntarily join together in groups to increase their power and effectiveness  (more about that tomorrow).

Today, let’s take encouragement from the fact that lots of us are in this situation.  Getting to know others on the trip is good for each and every one of us.

Suzy developed Midlife Divorce Recovery as a safe refuge for people healing and surviving the overwhelm of divorce. Starting her first RADiCAL support group in 2003 she's been helping women navigate the journey of divorce ever since.
Subscribe
0 Comments
Inline Feedbacks
View all comments
‪(609) 316-0839‬
Get A Free Consultation