Who’s holding you down? 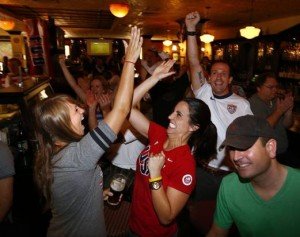 Choose to have people around you who are cheering you on, not holding you down or pushing you back. We’ve been promised a victory beyond our wildest dreams! Let’s go after it!

“Trying to increase your income while surrounded by naysayers is like leaving the house with a couple of kids hanging on each leg, begging you not to go. Chances are you won’t get very far.  Even if you eventually do, it’s much harder and takes a whole lot longer.”  Barbara Stanny in Overcoming Underearning

Guys have their athletic supporters …  (Some of them for their little teeny … okay… okay …. I won’t go there!)  We’re going to have our financial supporters!  Alright team!  The more I study this, the more excited I get.  For all of you who have been wallowing around in this pit of divorce, it’s time to get out!  And in all the books I’m reading about financial success, the more I see that we need people around us who are pulling for us … not holding us down or pushing us behind them. (Who has that been lately? Hmm?) It’s time to assert ourselves and say, “Hey wait a minute!  I’m in charge of the rest of my life!  Plus I’ve got the Almighty God of the Universe clearing the way for me!  He has plans for me!  Big plans!  Unbelievable plans!  Barbara Stanny goes on to say this:  “Indeed, all of those I’ve talked to who became high earners were surrounded by people who cheered them on, held them accountable, modeled what’s possible, provided resources and inpired them to aim higher!”  That’s us!  We have our built-in team already.  It’s all of those MDRcommunity members who are doing exactly that already.  We’ve been doing it emotionally and spiritually and intellectually.  Now let’s do it financially, too.  I am convinced that prosperity is mainly a state of mind.  Gratitude is a state of mind.  Wealth is a state of mind.  But those things come about by taking charge of our financial reality and realizing that we can be successful in whatever we decide to do.   Wealth of every kind happens by planning and discipline and perserverance and being willing to be uncomfortable on the road while we move forward.  And it means having people around us who are doing everything they can to make us successful in everything we do.  Let’s start today by praying for each other.  For our financial success.  For creating the life we want.  For letting God work his perfect purposes out in our lives.  Even if you don’t believe in God, ask for him to make himself known to you and to lead you to his fantastic life!  We’re all using some time to GET CONTROL OF OUR MONEY!  To find out how much we have and where it’s going every month.  We can’t do anything else until we get control of that.  Keep writing down what you’re spending every day this month.  Forget about athletic supporters.  Embrace your R.A.D.I.C.A.L. Supporters!

“God can do anything you know — far more than you could ever imagine or guess or request in your wildest dreams!  He does it not by pushing us around but by working within us, his spirit deeply, but gently, within us.”  Ephesians 3:20 (The Message)